Starman: Thoughts on an Ordinary Icon

Death is a subjective experience. We go through it alone, and those that remain remember the deceased in their own selfish way. It’s a truth that becomes more clear when many mourn at once.

After the initial, sudden, oh-God-it-can’t-be-true shock of the passing of David Bowie this morning, I began to think about when I first became a fan. It’s a tricky thing to do because there are so many moments and reasons in Bowie’s career that could turn anyone into an aspiring aficionado. The many changes that the self-styled Chameleon of Pop underwent meant that there was something for everyone. He could transcend the terrific weight of expectation to keep us on our toes. It’s these changes that made it seem he could outlast any trend, any label, any person. But he couldn’t.

On reflection, my fandom for Bowie could be traced back to a performance of ‘Life on Mars’ on Parkinson in September 2002. I was 15 at the time and my musical knowledge beyond the charts, let alone my knowledge of Bowie and the cult that came with it, was practically nil. (By way of context, I recall a dusty cardboard box with my mother’s cassette collection inside yielding the country hits of Brian Coll and the none-more-recognizable visage of Nana Mouskouri, but I digress).

It shows the genius of Bowie that ‘Life On Mars’ felt as fresh in that performance as it must have done to the masses who were all Beatle’d out when it was released in 1971. When it came from the mouth of the snow-skinned, lightning bolt-sporting king of freaks Ziggy Stardust, it sounded like an ode to the griefs of teenagers who were growing further and further away from the previous generation like never before (“But her Mummy is yelling ‘no’/ And her Daddy has told her to go.”). It was a polite rallying cry for and against red-blooded revolution; was he invoking Lenin or dissing John Lennon? You could have it either way, which was, of course, what Bowie was all about.

Coming back to 2002, the same song that once carried so much meaning now came with a greater sense of melancholy. The then-55-year-old, dignified in a turtleneck, sang more plaintively than Ziggy, the youthful electric strings eschewed for accompaniment from Mike Garson’s sombre piano. This was not the song that Ziggy sang; this was David Bowie, elder gentleman and knighthood rejecter, taking a look at the same phenomena through the looking glass of age. The poor teenager is being turfed out by her distraught parents; your heart rends for them all, not just the mousey-haired one. This is the recognition from an older man that, despite his outward dressing, little has changed. The saddest part is that the relevance of this rendition has only grown since. Rule Britannia is out of bounds to Syrians stranded in Calais. The mice in their million hordes have taken the Disney-owned Star Wars: The Force Awakens to box office nirvana, definitive proof that Mickey Mouse has grown up a (cash) cow. But even though this version was being delivered by an older and wiser Bowie, the sadness of the original was still there, and was still more than enough to speak to a 15-year-old who felt out of place (as all 15-year-olds do).

David Bowie’s output from first album to last was, by his own admission, clothed in this melancholia. As evidenced in ‘Life on Mars’, it was initially based on the left-wing leanings of youth but, despite changes in his image and fortunes, his albums always contained a more general and identifiable discomfort. He put it best himself: “I’ve always chosen to write with are things to do with isolation, abandonment, fear and anxiety, all of the high points of one’s life!”. It’s no surprise that the youth emerging from the ashes of the Summer of Love latched onto his sound. A world in the depths of the Cold War and all that came with it (Nuclear terror, Vietnam and so much else) was no place in which to Monkee around to those Good Vibrations. The release of ‘Space Oddity’ in July 1969 was an on-the-nose and strangely lachrymose beginning to a stubborn prescience that kept fans agog and critics buzzing. We were afraid of Queen Bitches and Men Who Sold The World; we just didn’t realize it before Bowie said it. That fear, that sadness, would reach its peak in the electronic dissonance of the Berlin Trilogy and ‘Scary Monsters…’. It’s apt that Bowie reached his creative apex in the mournful shadow of the Berlin Wall.

Bowie was loved and admired because he brought a touch of the exotic to the everyday, and vice versa.
He did it in his lyrics; he brought teenage angst and the perils of domesticity (“Take your protein pills and put your helmet on.”) into outer space.
He did it in his music videos; he announced the demise of Major Tom in the pink-bleached world of ‘Ashes to Ashes’, and crucified Oscar winner Marion Cotillard in ‘The Next Day.’
He did it in his films; how perfect was the casting of this most unidentifiable object as an alien for Nicolas Roeg in The Man Who Fell To Earth.

Yet, no matter the material, there was always someone very real, very human behind those dissimilar eyes. It was not an alien from Mars but David Jones, a boy from Brixton, who wrote so movingly of his mentally disturbed brother in the likes of ‘Jump They Say’ and ‘The Bewlay Brothers’. It was a man of clear, basic ideals who made nuclear fears pop in ‘Time Will Crawl’, and tapped into racial tensions in ‘Panic In Detroit’. It was his basic compassion that infused every pleading line of optimism in ‘Under Pressure’.

All these undercurrents awaited the 15-year-old me when I saw that performance by Bowie on Parkinson, standing before that piano, one eye firmly on Ziggy. The preceding interview is peppered with reminiscences; only Bowie could make an anniversary gift of a jacket owned by Little Richard (from his devoted wife, Iman) sound like receiving a naff teasmade. He always grounded the exotic.

Even his impending death was within Bowie’s lyrical grasp. It’s a sad reality that his final album, ‘Blackstar’, released just two days before his death, will be forever analyzed within the context of his passing. But that was his plan. He knew what was coming, and his response was to make lemonade from lemons: 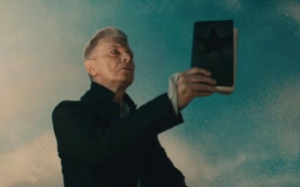 Look up here, I’m in heaven
I’ve got scars that can’t be seen
I’ve got drama, can’t be stolen
Everybody knows me now

All the world knows David Bowie now. They know he died. They know he lived. They know he wrote marvellous songs (Literally, some of them are marvels). We each knew him in our own selfish way. But it’s what he knew that astounds us most. He knew how to shock, to amuse, to constantly surprise. As an avid reader, a commentator and a human being, he knew what he had to do. He saw (ch-ch-ch-ch) changes coming down the line, including the ultimate change. Even in the midst of our mourning, we’ve yet to parse it all and discover just how right he was.

Goodbye, David. I never met you, but it’s been an honour to know you. Check ignition, and may God’s love be with you.